Dr. Jacques Fontaine is board certified by the American Board of Surgery and the American Board of Thoracic Surgery. He currently practices Thoracic and GI Oncology at H. Lee Moffitt Cancer Center in Tampa, Florida. He was rated the top thoracic disease doctor in the Tampa Bay Area in 2021, 2019 and 2018 by Tampa Magazine.

Esophageal cancer is a relatively rare malignancy that forms in the lining of the esophagus. It can complicate swallowing and cause chest pain. Trust Dr. Fontaine and Moffitt to find the best treatment options for you.

What Is Esophageal Cancer?

The esophagus is composed of several layers of tissue where cancer can form. Typically, it develops on the inner lining of the esophagus and, over time, spreads to the outer layers as the cancer progresses.

The American Cancer Society estimates that 18,440 new cases of esophageal cancer will be diagnosed in the U.S. in 2020. Diagnosis in men is three to four times more likely than in women. The esophageal cancer experts at Moffitt Cancer Center in Tampa, Florida, can help patients determine if they are at risk for esophageal cancer.

The two most common types of esophageal cancer are:

If you are experiencing any of these symptoms — especially trouble swallowing — schedule an appointment with Dr. Fontaine immediately. 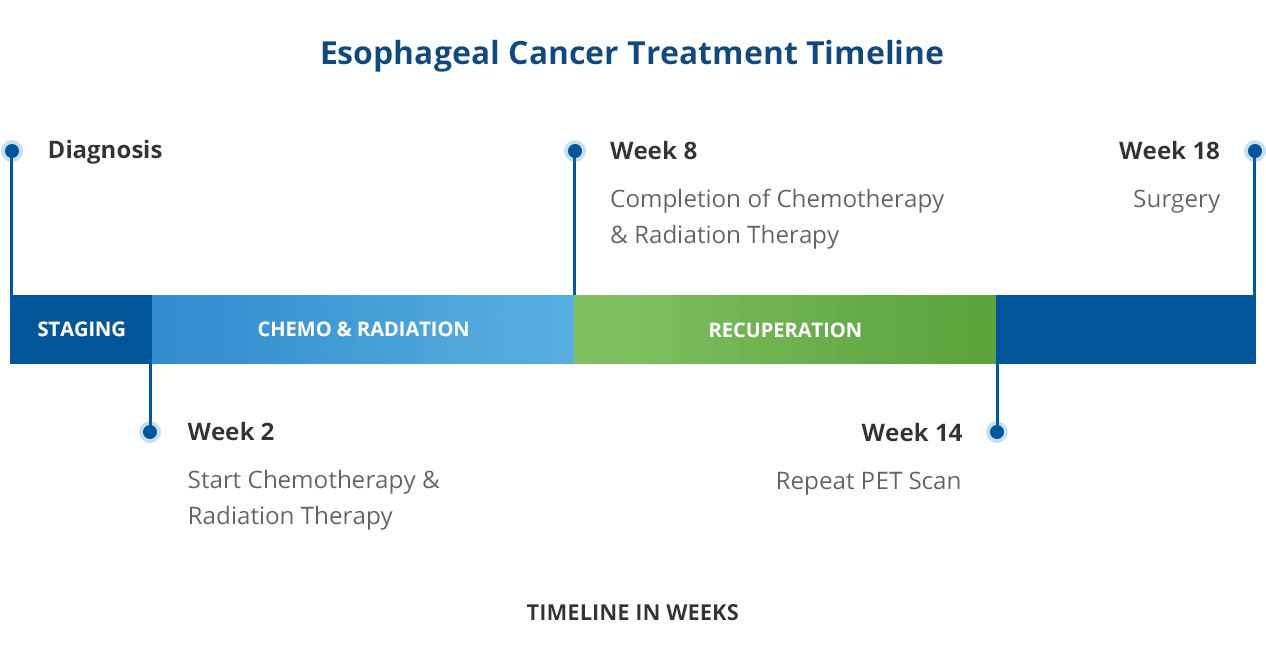 A barium swallow test (X-ray with special oral contrast) may detect cancer of the esophagus, but the most reliable way to diagnose the disease is with an endoscopy (EGD). During this procedure, doctors insert a thin, tube-like camera through the mouth to examine the esophagus and obtain a sample for testing, also called a biopsy.

Esophageal cancer is grouped into four stages. Stage I refers to very early tumors, while stages II and III are intermediate-staged tumors. Stage IV represents advanced cancers where the disease has already spread or metastasized to other organs.

The most common esophageal cancer treatments include surgery, chemotherapy and radiation.

Doctors in the Gastrointestinal Oncology Program at the H. Lee Moffitt Cancer Center in Tampa treat more esophageal cancer patients than any other center in the Southeast. This unique specialization allows them to offer the latest advances in treating this disease. Based on National Cancer Institute data, esophageal cancer patients treated at Moffitt have higher survival rates than the national average.

Learn about esophageal cancer and how it’s treated from Dr. Fontaine.

Esophageal cancer surgery is called an esophagectomy, and it offers the best chance of a cure for stage I patients. In some rare cases, some very thin tumors may be completely removed without formal surgery by shaving off the inner lining of the esophagus using an endoscope and a technique called endoscopic mucosal resection.

Referred to as an Ivor Lewis esophagectomy, this major cancer surgery involves removal of two-thirds of the esophagus as well as the surrounding lymph nodes and connects the stomach to the esophagus. Patients can expect to remain in the hospital about one week. Complications are common, but most are minor and temporary. The road to recovery can sometimes be bumpy, but the surgery offers the best chance of a cure.

At Moffitt Cancer Center, Fontaine is considered an esophageal cancer specialist. His team of thoracic surgeons performs more robotic esophagectomies than any other center in the United States. This experience allows them to have better results, and it gives patients an even greater reason to travel to Tampa for the innovative procedure.

Minimally invasive or robotic surgery offers many advantages to cancer patients who require surgery as part of their treatment. Through a few small cuts and with the aid of a magnifying 3-D camera and miniaturized, precise instruments, surgeons can perform surgery with fewer complications and less trauma, blood loss and pain.

Fontaine and his colleagues at Moffitt Cancer Center are leaders in esophageal cancer surgery and pioneers in robotic esophagectomies.

Get in touch with Dr. Fontaine to learn more about esophageal cancer treatment options.

Chemotherapy for esophageal cancer is used to shrink tumors and prevent them from growing and spreading. Patients diagnosed beyond stage I can expect to undergo weekly chemotherapy treatments for six weeks in combination with radiation therapy.

The rationale for administering chemotherapy and radiation upfront is to shrink the tumor and make it more likely for the thoracic surgeon to remove it completely. It may also decrease the risk of the tumor recurring after surgery.

Most patients receive 28 doses of daily radiation during the six weeks in which they receive weekly chemotherapy. Patients are then given six to eight weeks to recuperate, and a repeat PET scan is performed to see if the tumor has shrunk.

In 90% of cases, the tumor has remained the same or gotten smaller. If this is the case, and patients have recuperated sufficiently from their chemotherapy and radiation, then surgery is recommended. In 10% of patients, where the tumor has spread despite initial chemotherapy and radiation, surgery is not a good option as it would not increase their chances of a cure. 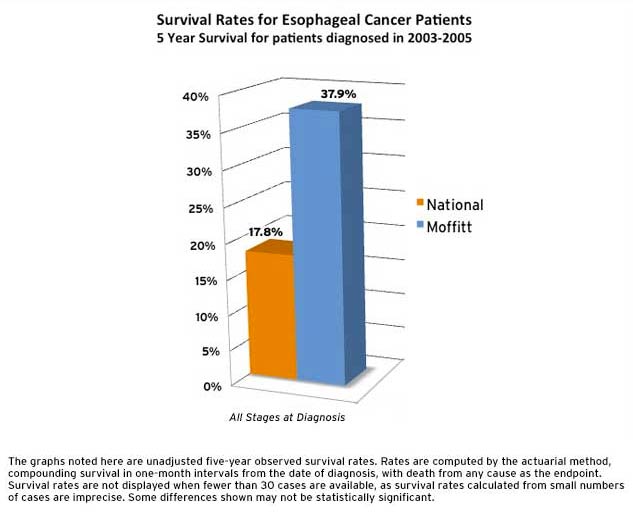 Why Choose Dr. Fontaine and Moffitt for Your Esophageal Cancer Treatment?

The National Cancer Institute recognizes H. Lee Moffitt Cancer Center as a Comprehensive Cancer Center for its resources, research and specialists. In fact, it is one of only two centers in Florida to carry that designation. Because of its recognition, patients from Clearwater, St. Petersburg, Sarasota and other nearby cities in and around Hillsborough County prefer Moffitt over other cancer hospitals.

This total focus on cancer has allowed Moffitt to provide the latest innovative treatment, including immunotherapy and access to the world’s latest clinical trials, to better target the cancer. The goal is to provide the finest care in the world.

Moffitt’s relationships with cancer specialists across Florida allow patients to combine treatment at home with surgery in Tampa, providing an almost seamless relationship in receiving the best possible care from multiple esophageal cancer doctors. This makes it easier for patients from nearby cities, such as Clearwater, Vero Beach or Sarasota, to travel to Moffitt in Tampa for treatment.

Fontaine’s unique mix of innovative thinking and more than a decade of experience in esophageal cancer make him the thoracic surgeon of choice at Moffitt. In fact, Fontaine says nearly one-third of all his patients are diagnosed with esophageal cancer.

He is also a big believer in Moffitt’s Experimental Therapeutics Program and often encourages patients to participate. 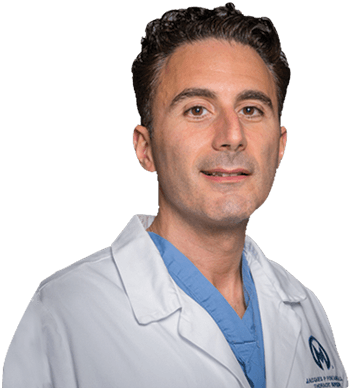 Make an Appointment with Dr. Fontaine